A Quiet Cup Of Coffee

With a satisfied sigh, I settled into my seat. My fresh cuppa found a place on the small table, as did my selection of hot rolls. It was 6:20am, early even for me, and I had easily caught the direct train to The Hague, with time to spare to acquire a quick breakfast before boarding. Biting into my first roll, I felt the coffee cup, but decided it was still too scalding hot for that divine first early morning sip. I opened my Kindle and, munching away, picked up my reading where I’d left off last night. The PA system crackled into life, and a voice announced the train’s destination. After that, the sound of my chewing, and the regular clicks of the Kindle’s page-forward button, were almost loud in the restful silence of the Quiet Compartment. 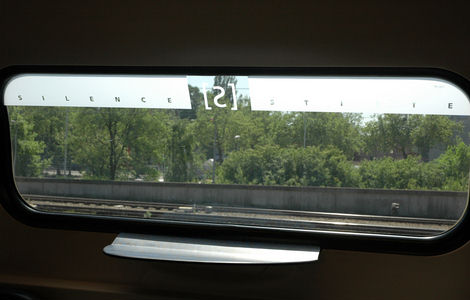 Ah, those quiet compartments. A welcome addition to the train system of the Dutch Railroad, the quiet compartments were introduced a couple of years ago to offer commuters and other regulars, and even occasional travelers with a love of peace and quiet, a chance to work, read, or simply stare out of the window, without any sounds disturbing the silence. Marked clearly in multiple languages with the words “silence / stilte” on all windows, these compartments were intended to offer a haven of rest for anyone in need of such.

But these are The Netherlands.

In Germany, people would respect the concept out of simple respect for the rules. In Belgium, the base level of polite consideration would all but guarantee the absense of noise. In the States, train staff would probably enforce the silence, in much the same way the Dutch train staff absolutely do not. The Tokyo subways would also stay quiet, if only because they are so crowded no one has breath to make sounds.

But the Dutch, who pride themselves on their liberalism and blanket tolerance, are horrible when it comes to simple, day-to-day mutual consideration. Sticking to rules they themselves don’t care for is not in their nature, it seems: that anyone else might appreciate their respect for those rules is considered irrelevant. Generous as a country, broad-minded on social and global issues, we tend to become narrow-minded and egotistical when the values we hold so dear actually threaten to touch our individual freedoms.

So being quiet in the quiet compartments? Yeah right!

Passengers behave no different there than in any other compartment. The majority is in fact silent because that’s what passengers usually are in trains. Some talk quietly, some talk loudly, and some make noise in a surprising variety of ways.

There is a group of commuters who travel from Amsterdam Central Station to Amsterdam Sloterdijk every workday, to their workplace at the Belastingdienst (the Dutch IRS). For reasons incomprehensible to me, they insist on sitting in the quiet compartment, and on talking in the same raised voices, making the same stale sewer-level jokes, and laughing the same grating laughter every time. Requests for silence are greeted with ridicule and rudeness.

I’ve had people insist that “silence” doesn’t actually mean “silence”, and that I should move if their noise bothers me. I’ve had “fellow” passengers playing their iPod so loud I could hear their music on a level I’d find close to uncomfortable if it was playing on my own headphones, and snapping at me for asking politely if they could turn the volume down (“No, it’s not loud, and if it bothers you, just move the hell away from me!”) I’ve had loud-mouthed student types in an almost empty train choosing to perch on the armrests of the seats across from me, and answering my requests to respect the silence with smirks and outright mocking laughter.

So perhaps my mindset wasn’t optimal when, just when my coffee was down to drinking temperature, two ladies of the Schiphol security staff sat down two seats down from me, and continued their inane conversation at a volume level more suitable for a stadium concert. The jump in my blood pressure had nothing to do with my coffee.

I took a deep breath and reminded myself that polite diplomacy always trumps confrontation. I got up, moved quietly to the ladies’ seat, and said in a stage whisper:

“Excuse me, you’ve probably not noticed the text on the windows, but this is a quiet compartment. If you want to converse during your journey, would you mind moving somewhere else?”

They looked at me as if I had invited them to an indecent house party. The woman nearest me, a fat, frumpy dwarf in her early forties, produced noises I interpreted as grudging agreement. And indeed, as I moved back to my coffee accompanied by grateful nods from the other passengers, their conversation had ceased.Only to be resumed seconds later, albeit on a slightly lower volume.

With an internal sigh, I made my way once more to the chatty ladies.

“I’m sorry if there is any confusion. The word ‘silence’ actually means ‘silence’ here. I’m sure there are many seats available elsewhere on the train, where you can chat to your heart’s content. But if you stay here, please respect the silence.”

Frumpy turned out to be the type of person who has learned through a hard and unpleasant life to always counterattack with more words and volume than the perceived assailant. I stood firm through her verbal onslaught, which when analyzed boiled down to: “We’ll speak wherever we want to, and if you mind, just sod off.” When they resumed their conversation, however, it was in a loud whisper.

Since actions speak louder than words, I decided that my interventions were having the desired effect, be it in small steps, and spoke to them again to explain that a loud whisper still is not silence. Frumpy responded that in her opinion, the words “silence / stilte” on the windows were not actually intended to mean “silence”. I explained to her that of course the Dutch Railroad had meant “silence”, since the word literally means that, and since that was also what the train staff had very recently said over the PA system. She switched tactics to flat-out refusal then, on the grounds of not giving a shit.

That’s when I snapped.

I moved back to my seat and reconfirmed that my coffee was in fact at drinking, not scalding, temperature. Then I approached Frumpy and her mate for the last time. In the politest, most pleasant whisper I have in me, I told her:

“In about a minute, I’m going to get up and move to a different compartment, because your noise and rudeness bother me too much to remain here. I will pass by your seat as I walk away, and I predict there is a very real risk that I will stumble and spill my hot coffee all over you. If you want to avoid that risk, and the bother of having a uniform covered in coffee stains, you may do well to move to a different compartment yourself.”

Startled into outraged silence, Frumpy had no response as I gave her my most winning smile and moved back to my seat. I proceeded to pack my stuff, and took the lid off my coffee cup, before I got up to do as I had announced. The two security ladies saw me get up and raised the volume of their conversation a few notches, to let me know they were now discussing the decline of civilization as demonstrated by my incredible rudeness as opposed to their entirely reasonable attitude.

I took the few steps that separated me from their seat. Halting pointedly, I caught Frumpy’s eyes, and said:

The coffee made a huge, satisfying stain on her light blue uniform blouse, and drenched her neatly pressed marine pants. A splash found its way into her walkie talkie, which died with a pleasing crackle. Frumpy jumped from her seat, bellowing incoherently, and confronted me as if she was about to wrestle me to the ground.

“I’m so sorry,” I said with another of my winning smiles, and handed her a tissue. Her face turned an alarming shade of purple. She made two attempts to speak, and then stalked off with her mate in a cloud of fury.

With shaking legs I took my seat. My rolls were cold, and I had no more coffee. The adrenaline turned to poison in my veins. I sat shivering, simultaneously exulted and appalled, glad at some level that I’d acted, but horrified by my low-key violence, and worried about aftermath and repercussions. The silence in the compartment was absolute, without even the whisper of pages being turned. When I dared raise my head, my considerable length allowed me to look over the seats around me, and I saw every face turned towards me. I swallowed. My throat was dessicated.

Then a man across the aisle, with a notebook computer in his lap, raised his hands and slapped them together. He repeated the motion once, twice, again, until it was clear he was applauding. The lady next to him joined in, then I heard clapping start behind me. Moments later, the silence in the compartment had been replaced by an ovation that seemed to last minutes. I felt my cheeks heat up, and two tears ran down my cheeks.

After a while, the applause died down. Notebook Man kept it up a litte bit longer, until the lady shushed him, to general hilarity. Silence returned to the compartment, a comfortable, relaxed silence this time, and I sat back in my seat to bite down into one of my cold rolls.

Suddenly, a head popped up above the seat in front of me. An arm joined the head. I flinched, but the hand at the end of the arm held nothing more threatening than a cup of coffee.

I accepted the cup wordlessly, and smiled with raised eyebrows, trying to convey both gratitude and confusion.

“Just in case,” the head said with a grin, and disappeared again.

In the silence, I sipped my coffee, and was happy.