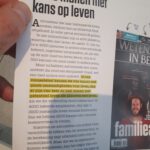 When even a scientific magazine like Wetenschap in Beeld (Science in the Picture) makes huge errors like this, errors in their thinking as much as in their facts, it’s no wonder that less and less people really understand science, and more and more people lose faith in it.

In their April issue, WiB printed an article making the case that there may be 500 habitable planets among the 4,000 known exoplanets. And there may even be as many as 2,000 habitable moons circling those exoplanets. Their reasoning, or rather, their statistical method, is embarassingly flawed.

The numbers check out, you may say, so what’s wrong with their reasoning?

For starters: it’s ridiculous and sheer bad thinking to start a chain of reasoning with an actual inhabited planet, and make the jump to moons that might conceivably be capable of supporting life. That’s like starting your argument for the prevalence of cake by counting actual cakes, and expanding your argument by including any room where flour, milk, and eggs* are in proximity .

Earth is the only planet with life of the eight in our Solar system, so the ratio of habitable planets in any solar system is 1:8.

Point is: our N=1 Solar system does not provide any grounds whatsoever to support the 1:8 conclusion.

And of course, they make the same mistake two more times in the same piece. Once, when they conclude from the same N=1 sample that the ratio of habitable moons to planets is 4:1. And once more, when they take that already flawed ratio, sourced from an N=1 sample, into the rest of the universe.

This is a science magazine, and not a single thing it states in the article is supported by evidence.

* Or whatever goes into cakes; I’m no baker.