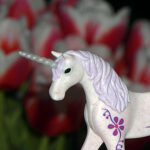 Another story was conceived today, thanks to thumb-sucking, Playmobil, and all boys’ desire to take apart again immediately whatever they build.

Our two boys are fascinated by the Playmobil Fairies series of products, and have this weekend achieved toy bliss through acquiring two mounted fairy figures, one on a spotted purple horse, the other on a single-horned steed (the eldest’s acquisition was the reward for ten days without his thumb in his mouth; his little brother’s for being a little brother). Almost immediately after we’d come home and assembled the sets—a process which involved, among other things, shoving the butt-end of a sharp horn into a gaping hole in a horse’s forehead—our youngest asked me:

“Daddy, take horn off for me?”

I tried to comply, but found that the horn, which had fitted easily into the hole, did not want to come out at all anymore. It seemed that the process of turning a mare into a unicorn, simply through sticking a horn in her forehead, was irreversible: you can’t turn a unicorn back into a horse.

Sooo… you stick a horn into a horse’s head, and lo and behold: you’ve created a unicorn! But what would bring someone to do such a thing in the first place? He’d have to be mental, wouldn’t he? And once the horse was a unicorn, could this possibly end well for all involved?

And most importantly: why did this story about unicorns insist on being titled The Allocution of Bob Hayward?

PS: After two commute writing sessions, the story stands at 2100 words. Without any unicorns in sight as of yet…