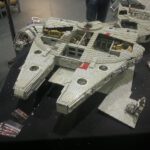 If my attendance at LonCon3 had been a Kickstarter campaign, I would be clapping and cheering and sending out rewards right now, because my stretch goals, however implicit, are all in the bag. 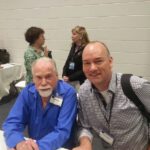 Admittedly, I had modest expectations of the Con. Attending a couple of interesting panels, getting a couple of my oldest books signed by Christopher Priest and Robert Silverberg (picture), checking out the cosplayers parading down the boulevard, finding out what a Con actually entails. Most of all, I intended to meet with lots and lots of people: from fellow Paul Harland Prize organizer Martijn Lindeboom, whom I’d never spoken outside of PHP business, to other members of the Dutch contingent, to fellow members of the Codex Writers Group, most of whom, despite my ten-year membership, I’d never met IRL, to fellow SFWA members, most of whom would be complete strangers. Of course, a Villa Diodati meet was also planned, so with all the people-meeting, and the drinking and feeding that would entail, my schedule seemed to be filled to the brim with calories, alcohol, and writers. 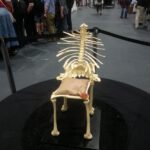 My primary goals were mainly not to make too big a fool of myself at the two panels I sat on, and to spend my hour behind the signing table not entirely abandoned by the world. Stretch goals? They were in the back of my mind, but not even probable enough to warrant verbal recognition.

On Friday morning, my first panel occurred: “I Like My Secondary World Fantasy A Little On The Techy Side”, discussing the place technological development can have in epic fantasy. Moderator Django Wexler steered the discussion with Robert Jackson Bennett, Glenda Larke, and Adrian Tchaikovsky onto topics such as the challenges technology brings to magical fantasy, the reasons why so many fantasy novels are set in unchanging worlds, and the ways in which magic is also a form of technology. No feet ended up in my mouth, and I ended up enjoying the experience quite a bit. What helped was that the audience seemed attentive, and came up with plenty of intelligent questions. 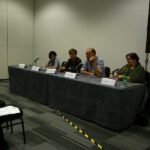 My second panel, on Saturday afternoon, posed a worrying question of the participating authors: are we “Always Outside, Looking In?” Aliette de Bodard, Thomas Olde Heuvelt, Ju Honisch, and I came to the fortunate conclusion that while there are real challenges to writing in English as a second language, they are not insurmountable, and the genre community is generally welcoming to newcomers from outside the Anglophone world.

And my signing matched fairly well with my expectations: too much of an unknown writer to draw any autograph hunters, I was joined at the table by Grayson Bray Morris, Boukje Balder, and Paul Evanby for quick chats, and got to say Hi to fellow writer and fellow Amsterdammer Carolyn Chang and hand her her signed copy of Mashup – A Collection, the paperback collection of all my published stories (still 13 copies available!). The stranger that also came to my table turned out not to own any of my printed works, and not want my autograph, but that was okay, because… 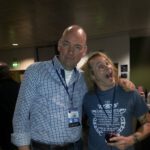 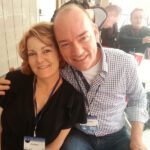 My first implicit strech goal was achieved Friday night, after I had discovered that not one, but two of my Writers of the Future buddies were also at the Con–and at the SFWA Reception. Cat Sparks, my favorite Ozzie and the acute angle of our WotF 2005 triumvirate (with Matt Reiten), suddenly turned out to be there after all, against my expectations, and forced beer, novel advice, and good conversation on me all through Friday afternoon. The multi-talented Ken Brady, whom I first met at the Writers of the Future workshop in 2004, and again in 2005, made his sudden appearance at the Reception, and still seemed to relish living on a different schedule. [stretch goal 1: meet very old friends – check!]

The stranger at the signing table turned out to be Alex Li from SF Comet, the ambitious Chinese short story competition that features monthly face-offs of Chinese fiction as well as significant cash prices. In their efforts to broaden and internationalize the contest, they are soliciting submissions from around the globe, and Alex was at my table to invite me to enter–or rather, bribe me, for their strategy is to first solicit international entries by paying semi-pro rates for them. My predecessors in the contest are Mike Resnick and Nancy Kress. Seven-mile shoes to fill, but that doesn’t deter me in the least! [stretch goal 2: reach a broader international audience – check!] 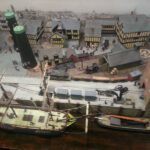 Approaching the dessert of our delicious Chinese dinner prior to Saturday evening’s Dutch Bash, Martijn Lindeboom, Grayson, and I were joined by Ad van Tiggelen, who brought bottles of Shiraz, a very accessible personality, and highly enjoyable table conversation. Not only is Ad better known as Adrian Stone, Holland’s most successful fantasy author, he is also one of the board members of the recently established Foundation for the Promotion of Speculative Literature (Dutch only), which has the organization of the Paul Harland Prize and the maintenance of the Hebban.nl fantasy pages as two of its activities. Ad and I had consistently managed to fail to run into each other for some years, and quickly came to the conclusion that our meeting had been way past due. [stretch goal 3: finally meet and chat with Adrian Stone – check!]

One of the primary reasons for authors to go to Cons at all is to network: meet other writers, but more importantly publishers, agents, and editors. Given that I’m generally even shy around people I know in too large numbers, and doubly so at large events, I’d given up on this goal in advance, marking it as something to try at the next Con I would attend, say in 2017. But suddenly, in line for the best coffee at ExCeL, I ran into Thomas and his Tor.com editor Liz Gorinsky; Thomas introduced us; the question “So what do you write?” was posed; and there I was, perfectly positioned to pitch my novel, and utterly without an elevator pitch prepared. I managed to get my tongue in gear, and blurted out my improvised pitch, and I can’t have done too badly, for Liz made encouraging noises of interest in foreign authors, and pointed to Thomas, who had her contact details. [stretch goal 4 through 62059: meet editor, pitch novel, raise a glimmer of interest – check with a cherry on top!]

And to tie it all in a neat bow, every single writer I spoke with for any length of time gave me useful tips on writing my novel, including, but not limited to:

Cat wins the prize though, for providing a long list of great books on a wide range of aspects of novel writing. Once I make it through them, I’ll be sure to post my own recommendations!

Even more details about my LonCon3 experience are in the blog posts I wrote for Dutch literary website Hebban.nl (Dutch only): Thursday, Friday, and Saturday.

The images on the left are all items in the Exhibits hall. Top to bottom: the Millennium Falcon, built in Lego, to scale for Lego minifigures, painstakingly reconstructed from design drawings and images from the movies; The Chair, a fan-built facsimile of the furniture playing a central role in one of the all-time best SF novels I know; a diorama representing Ankh-Morpork harbor.

The images on the right are all for real.