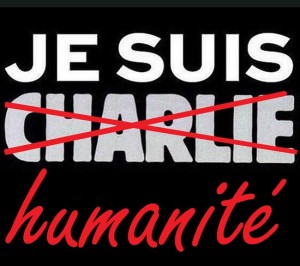 Much too much has been said recenty about the need, or even the obligation, on the part of Muslims to condemn and distance them­selves from the Charlie Hebdo murders. The most seductive reasoning I’ve heard for this is admirably pragmatic: however regrettable, it is a given that the actions of a few (be they racist skinheads or fundamentalist Muslims) determine the perception of many. As an identifiable Muslim one is associated with the deeds of one’s fellow “believers”; the only way to ameliorate this effect is to explicitly distance oneself from those actions.

But of course, that’s all topsy-turvy. At the root is the fact that a nitwit majority decides to paint all Muslims with the same brush, instead of realising that the djellaba-wearing neighbor, the owner of the neighborhood super, and the opthalmologist with the Arab surname, have as little relation to the Charlie Hebdo terrorists as those nitwits themselves do to the IRA or the Unabomber. This is the repulsive essence of discriminitation: to judge an entire group on the basis of the behavior of a few individuals who coincidentally happen to be members of that group.

So now all Muslims must actively defend themselves against the short-sighted, lazy discrimination of many? Methinks not.

It is a given that the vast majority of Muslims are not terrorists and reject terrorism; the same holds true for Christians, Jews, Rastafarians, Scientologists, Trekkies, evolutionary biologists, anti-vaxxers, agnostics, and atheists. No religious or political group has exclusive rights to terrorism, nor has any group exclusivity on suffering.

That’s why there is only one group beholden to the world to speak out now, and loudly, against terrorism, extremism, and fundamentalist. One group that needs to point out that all these increased security measures should not only apply to government buildings, Jewish institutions, and public places, but also to mosques, protecting those from the discriminatory retaliations that are just as terroristic as the original attacks. One group that needs to demonstrate in word and deed that there is much, much more that all citizens of our planet have in common than that polarizes them. One group that shows the world that the gratuitous demonizing of Islam is limited to stupidly dangerous people like Geert Wilders and his lazy-brained followers. One group that should now speak out for a broad international coalition, not just against IS and Al-Quaeda, but also against Boko Haram and every other terrorist organisation, of whatever religious or political denomination.