So why, I hear you ask, are you all dancing around Grayson Bray Morris? 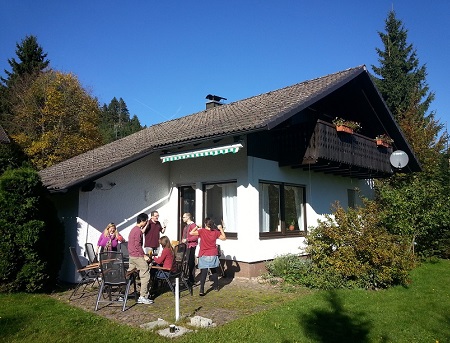 The answer is a tad involved, I’m afraid. Yes, it is true that last weekend was supposed to be a (semi-) serious writers’ retreat, with critiquing, writing exercizes, lots of laughter, and good food. And it was all that, in at least as copious quantities as previous installments of the Villa Diodati Expat Writers Workshop*. But before we got around to all that, our goal first had to be achieved through greater and greater obstacles and setbacks. The travel to our Casa Cristina venue was almost like a story in itself.

And we had it all planned out so neatly. Sylvia Spruck Wrigley, flying in from Wales, would meet Grayson and myself, both starting in Holland, at Amsterdam Schiphol airport, to fly to Basel. Jeremy Sim would meet us there from Berlin, and Jeff Spock had a flight from southern France. Ruth Nestvold, one of the two participants based in Germany, was coming by train. A rental car was waiting for us at Basel airport, and we would pick up Ruth at Schopfheim train station first before we would drive to Casa Cristina in the quiet, secluded southern German hamlet of Herrischried.

Then all flights but Jeremy’s got canceled, and the whole thing fell apart.

We did all manage to reach Casa Cristina in the end, and the weekend turned out as wonderful as suggested in the 2nd paragraph, but before we got to that point:

So if you were to ask me if writing is hard work, my unequivocal answer would be Yes. And to your query about the dance around Grayson, I can only say: it was the next morning, and even our seventh participant Christian Walter had made it to Casa Cristina by that time (after previously having been a week early at Schopfheim train station), and I guess we were just happy we all made it…

But it was all worth it. Because then we read and critiqued each others’ work, enjoying newly speculative fiction about mermaids on the Titanic, a purgatory road trip, colonists attacked by murderous vines and/or snails, a broken world, Arthurian historical fantasy, and a stripper turned detective on an asteroid mine. We brainstormed each others’ writing problems and story ideas. We played the Surreal Oracle** and laughed ourselves hernias. And yes, there was great food as usual, with Jeff, Sylvia, and Ruth as the chefs this time.

And in what is slowly becoming a tradition, at least one of the stories discussed at the weekend has already been sold (hurray to Sylvia for selling an entire series to Daily Science Fiction)!

* Which these days has a (sub-) entry in Wikipedia, it turns out (scroll down to the last paragraph in Popular Culture)!

** Four players or more. Materials: paper, pen, and sense of humor for each player.
Preparation: each player writes down five random questions and numbers them 1 through 5 (the only requirement for the questions is that they can have an answer). Each player also writes down five answers numbered 1 through 5. (The only requirement for the answers is that they may be preceeded by a question, though not necessarily one of the player’s own.)
Gameplay: The game is played in five rounds. In the first round, a random player is selected to start the game, and he or she reads his/her question 1 to the player to his right. That player answers with his answer 1. Then the second player poses his question 1 to the player to his right, etc. When the round completes, the second round commences, which is identical to the first, but with questions and answers numbered 2, and a different order of players if desired.
The game ends when all questions and answers have been used, or all players have been incapacitated by uncontrolled laughter, whichever comes first.