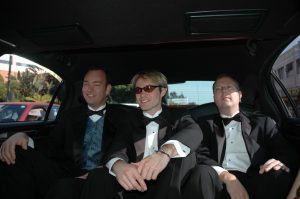 Although the jet lag abated after a while, my sense of unreality persisted. Here I was, attending a week-long workshop taught by big-name authors I’d been reading and admiring for decades. My fellow attendants and I were driven around in stretch limos and otherwise treated like celebrities. Better still, during the workshop sessions, the lecturers treated us winners (and finalists) almost like peers: our presence was sufficient evidence that we were at least competent writers. There was a lot to learn from that week, but it also provided a huge validation and confidence boost. 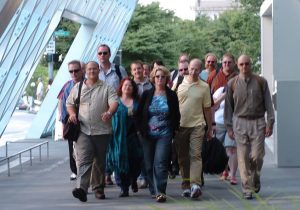 Moreover, it was amazing and wonderful to meet over a dozen fellow writers, people who, like myself, stood at the brink of a possible career, and had earned their first major accolade for their work. These were like minds, kindred spirits; in a very real sense, I had finally found my tribe.

However, jet-lagged, star-struck, and generally uncomfortable in groups of strangers, I didn’t get as much out of that 2004 week as I could have. The stress of interacting with so many new people almost non-stop exhausted me; the fact that the workshop lectures were famous authors I’d admired for years made it impossible for me to interact with them in any useful way.

It was therefore very fortunate that I got a chance to repeat the entire experience as a winner a year later.

In 2005, when I won one of the quarterly contest instances with my novelette Meeting the Sculptor and was again flown the States for the event, it was almost like I got a chance to replay my 2004 experience. The workshop was all but identical; the same guest speakers were present; the material was the same; and there was even another workshop attendant who, like me, had been a published finalist in 2004.

Finding the Future
We Pay Your Way
Identical Twin Workshops
Hero Worship
Documentary Evidence
Self-Help Books
Proselytizing After All?
What I Got Out Of It
My Thoughts On The Firewall
Conclusion

Scientology, Operating Thetans, and Other Silliness

Writers of the Future stories