We Pay Your Way

I sent my first novelette, Conversation With A Mechanical Horse, to WotF as 2003 drew to a close. Three weeks later, the WotF administrator emailed me to ask if my story would be avaiable for inclusion in the upcoming Writers of the Future anthology, and if I would like to attend the annual Writers of the Future workshop and awards gala in August.

One more thing I didn’t really know about the contest was that the top-three stories of each quarter are published in an anthology of the twelve best new stories of the year. I also didn’t know that they often filled up the anthology with selected non-placing finalists. And I learned these in the most delightful way: my story was a non-placing finalist (“published finalist”), and had been selected to fill up the anthology. 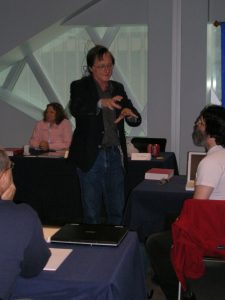 Of course, I expressed my stunned delight at being selected, but explained that while I’d love to come to the event, it would be doubtful whether I could afford it. Blowing my mind, the administrator replied that the organization would pay my way: return flight and a week’s worth of hotel room. As if I needed further enticement, she added that the workshop would be taught by a wide range of big-name guest lecturers, led by none other than Tim Powers.
Needless to say, I agreed to come.

In the seven months leading up to the event, preparations slowly took shape: a publication contract, edits and proofs, a bio, and flights. A pattern took shape that held up through all my interactions with Galaxy Press (the publisher of the anthologies) and Author Services, Inc (ASI, the organization in charge of contest and events): all the people involved in setting up the contest and event, and putting together the anthology, are kind, and accessible, and willing to be of assistance, but seem to be so disorganized and chaotic that it’s a miracle to me that anything gets done at all.

Nevertheless, by the time I was to fly to California, we had an edited story, a bio we agreed on, and plane tickets (which I’d ended up having to buy myself, and were refunded to me at some point). I sat on the plane in stunned excitement, and stumbled out into the terminal in a state of jet-lagged unreality. [read on…]

Finding the Future
We Pay Your Way
Identical Twin Workshops
Hero Worship
Documentary Evidence
Self-Help Books
Proselytizing After All?
What I Got Out Of It
My Thoughts On The Firewall
Conclusion

Scientology, Operating Thetans, and Other Silliness

Writers of the Future stories