Why I Don’t Debate Anti-Vaxxers Anymore, But Unfriend Them

Last night, I unfriended and blocked a guy on Facebook over vaccination.*

He wasn’t even too rabidly fundamentalist about the topic. Nevertheless, his way of arguing an anti-vaxx point of view had all the hallmarks of the widespread anti-vaxx disinformation strategy. Which is why I refuse to engage in this debate any longer. And why anyone who tries to start a debate on my timeline, and will not cease after multiple warnings, suffers the same fate as this guy.

“But debate is good,” I hear you argue. “Debate enables the changing of minds, the exchange of information and viewpoints, the sharing of scientific data to support either side. Silencing the debate only perpetuates dissent, and prevents change.”

That would be true if the given description of the added value of debate applied to anti-vaxx advocates.

Debating an anti-vaxxer, even one as mildly fundamentalist as yesterday’s ex-Friend, is like wrestling with an amoeba. Whatever pseudopod argument one refutes, it is simply withdrawn into the shapeless, immutable center, and several others thrown out. Worse, and unlike an amoeba, most pseudopod arguments thrown out look suspiciously similar to the ones one wrestled down a couple of debates ago. In other words, anti-vaxxers have a tiresome tendency to refuse to engage with rational counter-arguments, instead abandoning their position altogether and taking up a new one. Not debate at all, really, but a slippery, guerilla-like tactic not unlike the one used by creationists, and other religious fundamentalists.

As a matter of fact, anti-vaxxism has more in common with religion than science: arguing from a position of faith, but hiding that faith behind pseudo-scientific and seemingly rational arguments. Since the faith is the point, and not the arguments, the latter are readily abandoned like the unimportant outer defense systems they really are.

So one reason why I refuse to engage in debate with anti-vaxxers any longer is that there is nothing to be gained. The discussion just drags on as the anti-vaxxer tosses out the same tired old arguments again and again, regardless of how many times these have been refuted. The anti-vaxxer will not change their mind, and I will be left with a frustrated sense of time wasted and hands soiled with amoeba goo.

The second reason why I will no longer engage in vaccination debate, and will ban anyone who attempts to on my timeline or website, is false equivalence. False equivalence is the logical fallacy by which two opposing sides of an issue are assigned equal validity by virtue of both existing. This fallacy is not only popular in the vaccination debate but also in evolution versus creationism, climate change versus deniers, and other topics where science and reason stand against religion or other types of irrationality.

Take the evolution debate as an example. If you pit an evolutionary scientist against a creationist in a televised debate, it will seem like a fair and balanced discussion. Both sides have equal representation, and both sides have ample opportunities to bring their arguments to the table. However, the evolutionary scientist actually has the almost unanimous consensus of the scientific community, and a century of research, behind them, while the creationist brings fringe and dissident science at best, and mostly argues from religion. Both sides of the argument exist, but having either side represented by a single spokesperson, and giving both sides an equal platform, creates an entirely false picture of equal value to their arguments.

Similarly, in a Dutch late-night talkshow recently, three vocal and media-trained anti-vaxxers were pitted against a single doctor/immunologist who was clearly uncomfortable being on TV at all. Unsurprisingly, the discussion seemed to end on the side of the anti-vaxxers. Not because of any inherent validity to their arguments, but because representation was immensely biased against the scientist. True equivalence would have been to pit a single anti-vaxxer against a crowd of scientists, and give each and every one of them equal speaking time.

So I’m not going to engage in debate with anti-vaxxers any longer, because the screen time this gives the movement enhances the false equivalence fallacy. Even if every debate is another instance of pushing down the same tired old pseudopods.

Finally, I’m not going to engage in these debates any longer because the arguments have been refuted, the pseudoscience debunked, the logical fallacies exposed again and again and again, and the pattern is clear. In the past, I’ve gone through the trouble of looking into the issues anti-vaxxers brought up. Autism. Thimerosal. Mercury. Big pharma. Formaldehyde. Every single time, the science turned out to say No. Debunked. Refuted. Disproven. But anti-vaxxers keep bringing them up, and if they run out of old ones, they invent new ones. That pattern is sufficiently clear to me: refuting, debunking, disproving doesn’t make a difference, because anti-vaxxers don’t care about the science, don’t give a crap about their own arguments. Their stance against vaccination is a religion, as resistent to reason as any belief system.

What I am going to do is keep posting factual information, in the hope that this helps keep parents from straying from the path of reason and science, and thus exposing their children to the very real but unnecessary risks of diseases the kids don’t have to contract at all any longer. 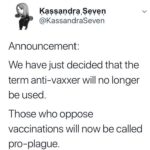 And if I manage to piss off some anti-vaxxers in passing, all the better; after all, it’s much harder to be an effective fundamentalist debater while foaming at the mouth.

PS: Comments have been disabled for this post. If you want to respond, you’re welcome to visit my Facebook page.

PS2: To enable fruitful dialogue, clarity of language is essential. Therefore, I suggest we take @KassandraSeven’s advice and start to refer to anti-vaxxers as “pro-plague”.

PS3: Since posting this, I’ve found that climate change deniers need the same treatment, and I’ve posted a similar piece about them.

* The Imgur cartoon that triggered the discussion, unfriending, and this entire blog post, is included below.