How Shazam Worked Before Shazam

Last week, while waiting for my train, I heard a song that I just had to identify. I held up my phone, tapped Shazam, and in seconds, I knew it was Music Box Dancer by Frank Mills. 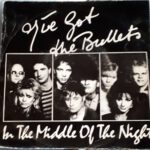 In an seemingly unrelated thread of my life, I decided that I wanted to learn to play the little jewel of a song Sheet of Rain by the Dutch eighties rock band I’ve Got The Bullets on the piano. It was the B-side to their first single back in 1986. My uncle Tijn Smit, who played piano and keyboards for the Bullets, was willing to provide me with sheet music. Only obstacle was that he didn’t have the sheet music (he wrote nothing down back then), and didn’t remember the song to write it down now.

So I scoured the internet for available copies of the original vinyl (their music was never published on cd). Quest accomplished, I proceeded to buy a turntable, and digitized the song to send to my uncle for transcription.

But of course, once I’d bought a turntable, and figured out how to digitize vinyl, I just had to get my box of old records from the attic, and take on the gargantuan project of digitizing ALL OF IT. One of the first records I encounted (since I obsessively alphabetize everything) was the 7″ of Freddy Aguilar’s Anak.

Which brings me back to Shazam.

All the way back in 1991, I was listening to Sky Radio** one day, when this gorgeous melancholy song sounded in a language that I learned much later was called Tagalog. The singer accompanied himself on guitar–these days, he’d be called a singer-songwriter.

The moment I heard the song, I knew without a doubt that my life would not be complete until I acquired the record. But Sky Radio had the bad habit of never ever announcing what songs they played, so I had no artist name, no title, and thanks to the language, not even a lyric fragment.

And of course, I did not have Shazam.

So how did I go about identifying (and acquiring) the song? How did Shazam work before there was Shazam?

(For bonus credit, identify and define all the paleologisms in this blog post.)

* Who, by the way, still plays piano and keyboards, for various renowned Dutch acts, such as VoF De Kunst and Vreemde Kostgangers.

*** Some years later, as part of a University project, I developed my first website, by manually typing the HTML tags into a text editor. Those were the days!