Why Nuclear Power Is Evil

Proponents of nuclear power like to claim that their pet energy source is so clean. I’m mystified by this argument, not mystified as a rhetorical device, but mystified in actual, I’m utterly confused, literal sense. Clean? What do you mean, clean? Have you actually thought this through? There’s no human endeavour less deserving of the adjective ‘clean’ than nuclear power.

Because in reality, there are three insurmountable problems with nuclear energy. Don’t worry, I won’t bore or bother you with the risk of waste-laying accidents. No Chernobyl talk from me, I promise. (If only because Chernobyl, and Three Mile Island, and Fukushima have amply made that argument for me.)

Again, I’m being neither rhetorical nor facetious. I actually mean that there are three distinct (though interrelated), insurmountable, unacceptable problems with nuclear waste. Sufficient reasons, I might add, to always and unconditionally vote against nuclear energy.*

Nuclear waste is dangerous, and remains dangerous for thousands of years. To mitigate the danger, the preferred strategy is to put it in lead-lined barrels, and stick it somewhere underground, where it can supposedly do no harm.** 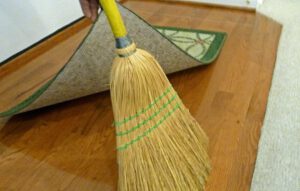 It honestly amazes me that this strategy makes any sense to anyone. It’s no different from sweeping dust under the carpet. If you can’t see it, it’s not there? That holds true only until someone needs to pick up the carpet to give it a proper beating. Lo and behold, there’s a pile of dust suddenly exposed!

Now admittedly no one is likely to take a carpet-beater to the ceiling of a disused salt mine. That’s where the metaphor breaks down. But there’s no end to what else might happen to breach the supposed security of stored nuclear waste. And there’s very little certainty on the very-long-term effects of barrels of nuclear waste stored underground (see Waste 3).

I mean, it’s almost childish, isn’t it? Put it away where no one can see it, and if you can’t see it, the problem doesn’t exist. I would hope humanity has grown beyond that particular infantile way of dealing with our shit.

Waste 2 – Quantity is a function of time

It’s tempting, I realize, to claim that nuclear power produces relatively small quantities of waste. And in absolute numbers, in terms of what gets carted off on an annual basis, and after how much productive use, it’s even kinda true. 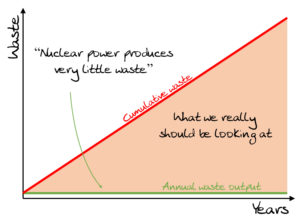 Quantifying waste is only meaningful if you take into account how long you’re stuck with the stuff. And as we all know (or should know), we’re stuck with our nuclear waste for thousands of years***. So the actual total quantity of nuclear waste humanity must be prepared to deal with is the product of the annual quantity times the expected number of years before the waste is safe. That’s the amount you need to take into account if you’re serious about nuclear power as a sustainable energy source. That’s the amount of safe storage you need for the waste.

Looked at it from another angle, the amount of dangerous waste will keep growing for as long as the first batch of waste is still dangerous. And after that, the amount will not decrease; it will stabilize. That’s a hell of a lot of dangerous nuclear waste.

And as an important aside: just imagine the number of lead-lined barrels (or whatever future storage container is going to be used) needed for all that storage. Ten thousand years’ worth of barrels. Is there even that much lead available in the world? And if there is, do we want all of it locked in a dead-end waste management process?

If something takes tremendously long (like nuclear waste breakdown), the only sensible way to look at it is the long view. Which brings me to:

Do you have an image in your head? 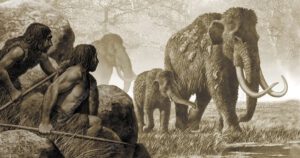 You cannot imagine what the world and humanity will be like. Ten thousand years ago, mammoths and sabretooths still roamed the Earth, animal pelts were considered the height of fashion, and the dictionary consisted of a limited repertoire of grunts. Stonehenge and the pyramids were thousands of years in the future. All of so-called human civilization had yet to make its cautious first start even in China.

And here we are, sticking our nuclear waste in salt mines, putting signs up warning people away, fencing the area off, and expecting the storage facility to remain secure and unbreached for a similarly inconceivable amount of time. 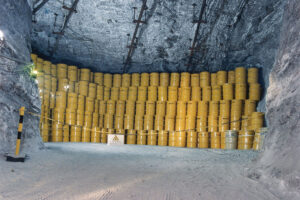 Listen, anything might happen in that time. Anything. A volcano might pop up under the storage facility. How would you feel about a pyroclastic cloud slash nuclear fallout combination spreading over the area? Or radioactive lava flows?

Sure, that’s an extreme scenario, and locations are undoubtedly chosen for their geological stability (though ten thousand years, people!). But some things are certain to happen in such an extended period.

People will change, and people will forget. Warning signs will disappear. Warning signs will become illegible, not just because the signs will deteriorate, but simply because people will forget the language they’re written in. (Yes, they will also, at some point, forget to update or replace them.) Documentation and archives about the storage will be lost, destroyed, or similarly illegible. The available information will be like cuneiform to our distant descendants.

Believing that humanity is capable of such a long-term endeavour is frankly delusional.

Which means, in a final analysis, that sticking our nuclear waste in the ground is tantamount to handing the nuclear waste problem off to far-future generations. And the better we are now at sticking the stuff in the ground, the farther in the future those generations will be, and the more disastrous it will be when they’ve thoroughly forgotten about it all, and go spelunking in this interesting, newly discovered cave system. It would be like digging up your garden to discover that the previous owner buried their leftover asbestos there. Only countless orders of magnitude worse.

Such a hand-off is, in my opinion, and again without intending to resort to rhetoric, merely intending to be literal, a deeply evil act against our own descendants. 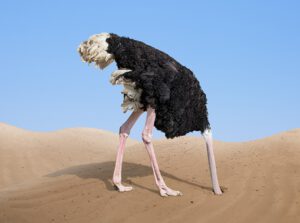 Sticking our nuclear waste in the ground is a childish ostrich strategy, akin to sweeping dust under the rug. The amount of waste we need to take into account is orders of magnitude larger than we like to admit. And long-term stability and security of waste storage facilities is certain to fail, making this strategy an act of evil against future generations.

Tell me again how nuclear energy is clean?

* Yes, fossile fuel waste is also very, very bad. That’s not an argument in favor of nuclear energy though; that merely proves that neither are acceptable.

*** Don’t tell me it’s only hidden underground until we find a better solution. For one, that’s another way of saying we’re handing the problem off to future generations, as evil as any problem-dumping into the future. For another, any solution is only sustainable if it’s sustainable now, not in some hypothetical future where our descendants have hopefully found a better way. That’s not problem-solving, that’s magical thinking.

**** I am aware that different types of waste have vastly different half-lives, varying from decades to millions of years. For argument’s sake, I’m averaging that to what Sting sang about 14C.