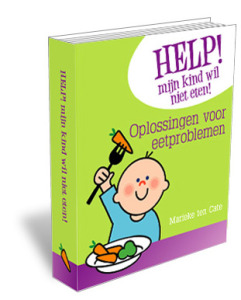 5 January, 2016: A year later, Marieke ten Cate of the Kindervoedingscentrum, who promised to change her ways after giving me my refund, turns out to have indeed changed her ways. The offending PDF pamphlet, which sold for €27,00 a year ago, now sells for… €27,00 “reduced from €39,95”. In celebration of this shamelessness, I’m reinstating the free gift at the end of this post.

Wonders never cease. Thirty-eight hours after I had posted this piece (and informed Marieke ten Cate of the Kindervoedingscentrum of the fact), I got a message from her, appropriately contrite and apologetic about the lateness of her response, and offering to immediately refund me the purchase price. And lo and behold: half a day later, the moneys did indeed arrive back into my account.

The blog post remains though, albeit in edited form. After all, an apology and a refund make good on the advertized money-back guarantee, but do nothing to improve the atrocious quality of the book itself, or the outrageousness of the price thereof.

This story may sound familiar to those of you with small children. Dinner time, and your toddler insists that today he doesn’t like the dish he ate with abandon last week, refuses to eat beyond a first microscopic spoonful, throws tantrums, cutlery and water mugs, and generally makes dinner time a recurring segment of Hell at the table.

Do I speak from experience? Yes, I do.

We have two children of the appropriate age, and each had developed his own set of strategies, behaviors, and tantrums for dealing with dinner. Time-outs only served to let them get away with not eating at all. Keeping them at the dinner table until they finished their plate ended up with us carrying a sleeping boy of admirable pig-headedness off to bed—with his food still on his plate. Dinner time was growing more and more into a time of dread for all involved.

Despair is perhaps too weak a word for what we were feeling.

These days, when stumped, what do you do? You Google. So we Googled, and after some heart-warming browsing of parenting forums—where it seemed that every single parent on the planet had at some point suffered through the same struggles—we came upon the website of Marieke ten Cate‘s Kindervoedingscentrum (Child Nutrition Center). With the name Kindervoedingscentrum itself already reassuring, it even had an entire page dedicated to their book about exactly this issue: “Help – Mijn kind wil niet eten!” (“Help – My child won’t eat”)

Now in retrospect, I admit that the Shopping Channel cheer of the page (“But wait! There’s more!” and all the Pollyanna testimonials you can wish for) should have been sufficient warning. But hey, this was the Kindervoedingscentrum, wasn’t it? And the book had the reassuringly steep price of € 27. Not to mention the money back guarantee featuring prominently on the page, in case of any (I repeat: any) dissatisfaction.

Also, despair was too weak a word, remember.

So we made our purchase.

When the download link landed in my Inbox, and I opened the downloaded file, I spent fruitless minutes waiting for the download to complete, before having to accept that 67 pages was, in fact, all there was to it. A quick browse told me that those 67 included the front page, the TOC, and 65 pages of content only lightly peppered with text, interspersed with large, but pointless graphics.

Suddenly, the price of the book seemed absurd.

Any dissatisfaction, I remembered, and sent an e-mail to Marieke ten Cate of the Kindervoedingscentrum, claiming half my money back for reasons of demi-dissatisfaction.

While Marieke ten Cate of the Kindervoedingscentrum mulled over her response—or so I hoped—I dug into my purchase. Maybe the book was thin to the point of transparency, maybe the price suggested that Marieke ten Cate of the Kindervoedingscentrum was in it for the money more than for helping desperate parents, but if the book was any good, and actually helped us bring peace to the dinner table, it might all still be worth it.

At this point, since this is the English version of this post, I should mention that the book is in Dutch.

A creepy double familiarity settled over me as I read.

I had just read an English-language self-help book (about an unrelated matter), published in the States, and recognized the rhythm of pages of supposedly real testimony from supposedly existing people, alternated with mere paragraphs of actual explanation of the self-help method, all of this surrounded by even more pages extolling the undeniable virtues of the method. After reading most of two chapters, it was clear to me that any actual, useful content in the book could have fit in less than two dozen pages. In fact, if the layout had been more sensible, ten pages would have sufficed.

Apart from this deplorable content inflation, something else was horribly familiar. I’ve been a judge for the Dutch Paul Harland Prize short story contest a couple of times, and in that capacity have had to disqualify several contestants for turning in stories translated, and badly so, from English. The book I was reading had the same clunky grammar, odd metaphors, literally translated English phrases, and, frankly, occasional gibberish. Not only that, but the examples and stats it used to make its point were clearly taken from American culture, from limiting your child to three hours of TV a day, to the complete omission of slices of bread as a breakfast food option, to mac-and-cheese as an example of a wholesome meal. As I progressed through the book, the Dunglish became worse and worse, as if Marieke ten Cate of the Kindervoedingscentrum had ground the original book through Google Translate, and had gradually lost her editing impetus between chapters 3 and 8.

There was no doubt in my mind: the book was a terrible translation.

To give Marieke ten Cate of the Kindervoedingscentrum the benefit of the doubt, I checked back on the website, but neither the cucumber slice thickness nor the English origins were mentioned anywhere. In fact, the image of the book (included above) suggested a hefty tome.

Of course, my demi- had now grown to full dissatisfaction, and I sent another e-mail to Marieke ten Cate of the Kindervoedingscentrum, claiming back the entire amount of the purchase under the advertised blanket money-back guarantee.

Now, people who know me will tell you that I’m not one to hold on to grudges, far preferring to share those grudges with the world at large. Hence this blog post., and the free gift I’m appending to the end of it. One of the many strange omissions on the web page and in the book, apart from the English origins, the author of the original text, and the minuscule size, is any kind of copyright claim or conditions of sale. As I understand consumer law, this means I can do whatever I want with the book, including sharing it with you.