The Art of Being Good

Is it even possible to be good at art?

Last year, I spent a very enjoyable week in a hotel on the beach, attending Bureau Zuidema‘s Personal Influence Program course. To balance out the emotionally harrowing, self-confronting content of the course as a whole, the final day contained the Flatter Yourself exercize. This exercize, intended to achieve nothing more than a good feeling, involved taking five minutes to name every single thing you can think of that is good and positive about yourself*, and then listening as the rest of the group took turns listing everything positive they have observed about you. Not surprisingly, everyone came out of that exercize feeling really good about themselves; after all, it’s nothing more or less than taking a bath in sincere and unexpected compliments.

One of the things I mentioned about myself, when it was my turn, was that I am a good driver**.  To which co-participant Michael, a great guy but much more of a motorcycle-driving, speeding, four-beers-is-still-okay macho type than I could ever be, responded in a voice not quite shorn of disdain:

“I bet you mean you stick to the rules really well.”

Well, yes, Michael. I am a good driver, because I get from A to B as quickly, safely, and efficiently as possible, while sticking to the rules of driving.

And mulling over this exchange further, it occurred to me that achieving the best possible result within the rules is in fact the whole and only point of being good at anything.

Being a good driver is by definition a matter of obeying the traffic regulations, because that is an integral part of what being a driver means. Driving fast, taking shortcuts, taking the inside of a left curve while ignoring a solid line, may be fast, but being fast makes you a good racer, not a good driver. Being a good driver entails knowing how to operate the car, knowing and obeying the traffic regulations, taking safety and environment into account, and every other knowledge and skill involved in getting your car, and your passengers, safely from A to B.

Similarly, being good at chess means being a good player within the rules of the game***. Being a good stock market trader means making a profit without using insider knowledge, stealing, or manipulating Libor rates****. Being a good athlete means running a great race without jumping the gun, using steroids, or tying a rocket engine to your shoes.

Winning by cheating doesn’t mean you’re good at anything, except being a cheater.

But if being good in a domain implies achieving a great result within the limits set by the rules of the domain, can you even be good at anything in a domain without rules?

Which brings us to art. Because in art, there are no rules.

The only art I know the first thing about, of course, is writing. I’ve written previously about the so-called Rules of Writing, but the truth is, every single writing rule is meant to be broken*****, once you understand it well enough to break it. What’s more, writers skilled enough to break the rules with impunity usually end up writing the best, most exciting, awe-inspiring, and award-winning fiction. 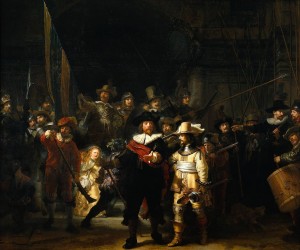 And this is true of all art forms. The most obvious example, perhaps, is Rembrandt, who caused such lasting excitement with his Night Watch by ignoring the established rules of both mise-en-scene and light.

But it holds true for pop culture as well. Of the most enduringly popular songs, the ones who have a lifetime subscription to the upper echelons of any top-1000 list, how many adhere to the standard structure of verse-chorus-verse-chorus-bridge-verse-chorus? And in the movie domain, Magnolia springs to mind, a brilliant ensemble piece that achieves an incredibly powerful emotional effect by having all primary characters break into song halfway through, against all established rules of drama.

But if rules don’t exist in art, or exist only to be broken: what, then, is good art? Is art good when it breaks established rules? Or even more extreme: can any work of art ever be said to be good?

And is life itself, with it’s lack of hard-and-fast rules, in fact art?

* And it turned out to be quite the challenge, for everyone, to fill those five minutes.

** Setting aside for the moment the question whether I really am; for the purpose of this piece, it suffices that I believed it at the time.

*** Not that I have any idea how you could possibly cheat at chess.

**** Which might actually mean that there are very few good stock traders indeed.

***** In Meeting the Sculptor, I was ignorant an naive enough to break at least four of the so-called rules in effect at the time: 1. write what you know (I chose to set the story in Manhattan), 2. tell your story in chronological order, 3. don’t write in first person, and 4. if you can’t help yourself and do a first-person protagonist anyway, under no circumstances kill them.