EDITED TO ADD (with a huge facepalm): Oh, and I won the SF Comet contest!

Another year over
A new one just begun

It may be corny to the point of maudlinity* to quote this particular song by Mr Lennon, but I can’t help getting a bit reflective upon the new year. Big changes occurred in 2014, both in my private life and writing-wise, and though not everything that happened was cause for cheer, my year in writing was the best so far.

Since I am a nerd with a fondness for statistics and a knack for computers, I crunched the numbers on everything that happened in my writing life in 2014. Here are the facts: 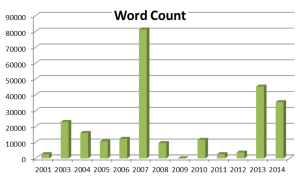 In 2007, I managed to pound out 80.000 words (a month off for NaNoWriMo, including a false start with a different project, helped tremendously with that).

And 2014 would have trumped 2013, if not for the chronic eye condition that flared up on November 3rd, and all but killed my word production in November and December. Still, almost 35K words isn’t too shabby. Three new stories saw the light, one of which sold immediately, and I managed to add some 17K words to my WIP, the Broken World fantasy novel.

The Submission Cycle (a.k.a. The Long Goodbye)

Thanks to a flurry of translation subs in November, my total number of story submissions peaked at 33. Two 2014 subs even resulted in pro sales of new stories (A Cold Welcome and A Matter of Mass)!

Seven more sales in 2014 were reprints; five were translations (to Dutch, Chinese, Galician, Romanian, and Portugese). All in all, I managed to convince nine editors to buy my work: that’s twice the next best year (2007), and almost five times my average until 2013.

To balance that out—and as a true measure of productivity—17 rejections came my way, though only 10 of them were actual rejections; the rest were out so long I just gave up on them.

The Only Way Is Up

Where it becomes really gratifying is in comparing all this to the previous years. When I do that, it becomes immediately apparent that 2014 was something special: it sticks out like a sore thumb. 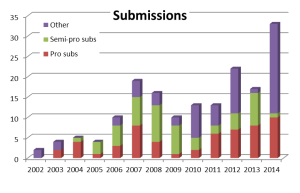 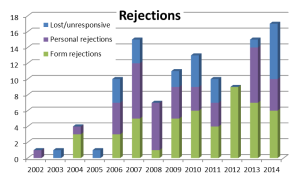 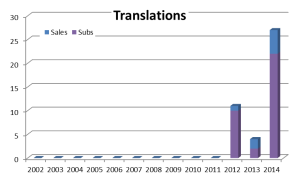 And finally, how 2014 really stood out for me was in terms of fun things to do in public, a.k.a. appearances. From a signing and a panel at the Paul Harland Dag, to a lovely intimate reading in a local theater, to a signing in my favorite local bookstore, to the marvelous time I had at LonCon3 (including a signing and two panels), to a Meet My Book reading at Amsterdam’s foremost English-language bookstore, 2014 was really a year of bringing my writing out into the world, and connecting with kindred spirits.

It is often quoted that “writing is a lonely occupation”, but 2014 has proven to me that whoever said that must have been confusing writing with philately.

More words: finish the 1st draft of the novel, write a synopsis and 2nd draft, revise two stories in urgent need, and grab every opportunity to write new shorts. Target is 50K! More submissions, subbing everything I have available as soon as it becomes available. More sales, so editors, you know your jobs! And last, but not least: more novel subs. I mean to have the 2nd draft sub-ready.

Finally, the appearances were a lot of fun, so those, too, will be topped if I can. I’ve a Meet My Book reading scheduled in The Hague (soon to appear on their Events schedule), I’ll host another Meet My Book there, I hope to do both a signing and a panel appearance at the Gala van het Fantastische Boek, and I’m guest-lecturing to a group of talented students at a school in Emmen. And all that’s just in the first Quarter…